I’m lucky enough to work with some amazing performers – from my sister, Polly (aka Philippa Tozer), who spent many years working in musical theatre, to my friend, Steve Rose, whose studio I record in and who works as a producer, composer and multi-instrumentalist.

Steve has helped me put together the tracks for the animated children’s series Polly and I are developing with KingBee Animation. I wrote most of the songs in a flurry of inspiration one Summer but I’m adding to them all the time – bringing in session musicians to play on the backing tracks and singers to redo the vocals in the voices of the characters from the show.

Earlier this month, it was the turn of Mishael Lazarus, an incredibly talented vocalist and rapper who was introduced to Polly and me by Martyn at KingBee. We’d been looking for someone to provide a line of dialogue for our animated teaser – ‘Like the time when we met Lady Butterfly!’ – but we also needed someone to perform the rap I’d written for the accompanying song, Flutter By.

The song has a ska feel and I’d originally planned to put a trombone solo in the middle. I was thinking of Rico Rodriguez’s famous solo on the 12″ version of Ghost Town by the Specials (not to mention A Message To You, Rudy) and was planning to ask singer and trombonist, Ashley Slater, to do the honours. Except I’d been listening to another ska band, The Skints, whose song, This Town, I’d heard on BBC London’s Robert Elms show.

I found the wordplay and vocal dexterity mesmerising and before I knew it, I was writing a rap in what I hoped was a similar style. This is the rap that Mishael Lazarus performed and I’m delighted to say he gave it the thumbs up!

It’s actually a battle rap as two bees, Ragga B and Rasta B, fight for the affections of Lady Butterfly. There are four verses and the bees exchange a verse each, then two half-verses and finally four one-liners as they slug it out over the mike.

I’d also asked Mishael to freestyle on a second track, Strong Like King Kong, featuring a baby gorilla boasting to his dad about how strong he is. Both Mishael and I felt that the dad should have a more African-sounding voice (although we realise that Africa is a vast continent with a huge variety of languages and accents!) to reflect the fact that gorillas live in equatorial Africa. Mishael came up with a great Daddy Gorilla voice inspired by his Nigerian heritage.

It was fun watching Mishael inhabit these different personas – the swaggering Ragga B, the laid-back Rasta B and the protective Daddy Gorilla trying not to laugh at his over-confident baby boy!

The two tracks are currently being mixed and I’m looking forward to seeing Ragga B, Rasta B and Lady Butterfly come to life in our animated teaser courtesy of KingBee.

In the meantime, thanks again to Mishael Lazarus for a fantastic day in the studio. It was brilliant working with you! 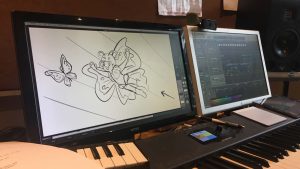 In the studio with King Bee Animation 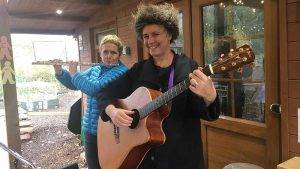 Carols in the Wildlife Garden

Music in the Wildlife Garden